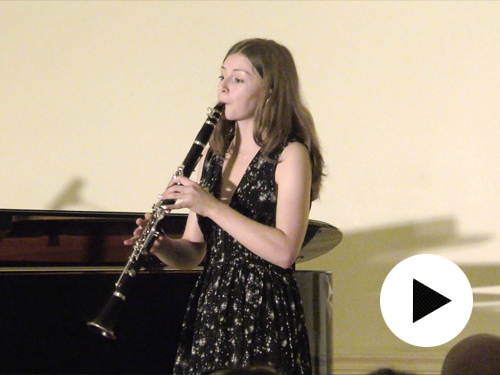 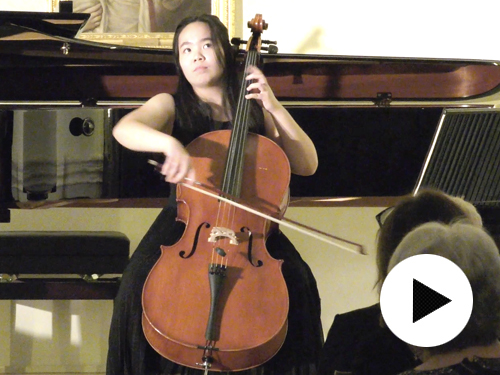 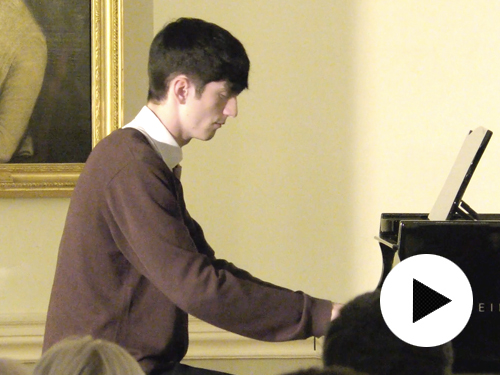 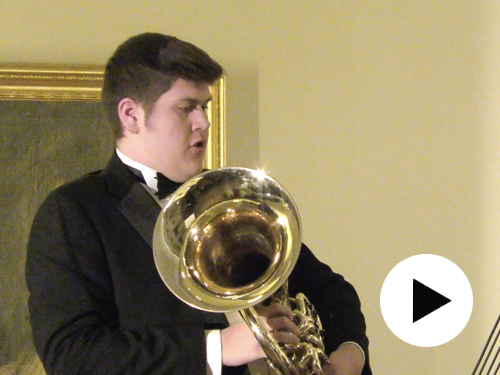 Bath Young Musician of the Year, one of the Mid-Somerset Festival’s most prestigious events, took place in the Pump Room to an enthusiastic audience. The impressive high-ceilinged room with its huge, sparkling chandelier was once again filled with the sound of music as five talented performers, all of whom gained outstanding marks in the March festival, competed for the title.

Amelia Wise was the first musician to take to the stage with her clarinet, followed by cellist Megan Ong, pianist Ruben Ridyard, violinist Evie Maya with Jack Harris rounding off the performances with some spirited euphonium playing.

The audience was treated to a range of music from the haunting tones of Debussy to the thrilling dramatic chords of Beethoven – with all performances displaying powerful emotional resonance. One of the three adjudicators, Jonathan Cross, Professor of Musicology at the University of Oxford, admitted it was an unenviable task picking a winner as all performers ‘played with flair and style.’ Another adjudicator, composer Liz Lane, concluded there had to be just one winner for the trophy – although there had been a lively discussion as to who that should be. The successful recipient of the impressive silver cup and a generous cash prize was Beechen Cliff student Ruben Ridyard. He was commended by adjudicator Katherine Stonham for his impressive technique and masterful ‘big’ programme. Ruben played Dohnanyi’s Rhapsody No. 3, Op. 11 which he chose because it was ‘harmonious and interesting and you can’t tell where the harmonies are going to go’ – which led to a performance full of surprises.

The Mayor of Bath, Cllr Rob Appleyard, was fulsome in his praise for the young musicians. ‘What a wonderful display of talent,’ he said, ‘I’ve taken something from every performance.’ He also thanked those who made this event happen: Music Chair Janet Read and her committee, competitors, teachers, accompanists and the sponsors of the festival. The Roper family is the major sponsor and Paul Roper presented a cash prize to all competitors.

Bath Young Musician of the Year, since its inception in 1987, has been the starting point of many musical careers. So, it was rather fitting that one of this year’s adjudicators, Katherine Stonham, had won the 2016 title. And, in the same spirit, the 2019 winner Xavier Raynes was welcomed back to entertain the audience with a Saint Saens bassoon sonata while the adjudicators made up their minds.

Bath Young Musician of the Year 2019

This was another very inspiring concert at the Pump Room, emphasising how high the standard of musicianship continues to be, in spite of a rapidly changing world. The former Mayor of Bath, Patrick Anketell-Jones commented on this, adding it was a ‘life experience being in the presence of so much talent.’  Janet Read, Music Chair of the Mid-Somerset Festival, also welcomed Cherry Beath (Hon. Patron of the Mid-Somerset Festival) and Paul Roper of the Roper Family Charitable Trust, principal sponsors of the festival, who presented prizes to all contestants.

There were five different musicians: piano, horn, soprano, harp and bassoon, all of whom, the adjudicator said, performed superbly. It was not easy to choose a winner between different instruments/voices and genres of music, but the adjudicator said the most important aspects were to be in control of the music, to respond to the composer, have impressive techniques and the ability to change the sounds of the music at different sections.

Will Liao (Piano) played by memory Ravel’s Sonatine (2nd movement) and Chopin’s Ballade no 1 in G minor. Will Liao was born in Shenzhen, China in 2001 and came to England in 2017.

Clara Phelps (Soprano) sang by memory a good varied programme of songs by Handel, Mozart, Mendelssohn, Copland and Parry.  Clara is at Hayesfield 6thform and also hopes to study music at university.

While the judges were choosing the winner, the 2018 Bath Young Musician Katie Bunney (Saxophone) played varied music by Planel (Prélude et Saltarelle) and Iturralde (Pequeña Czarda) reminding the audience of her superb performance the previous year. The winner of this marvellous concert was Xavier Raynes who had played so well on the bassoon. It was a wonderful evening, and all music lovers are strongly recommended to come to the future Mid-Somerset Festival concerts. 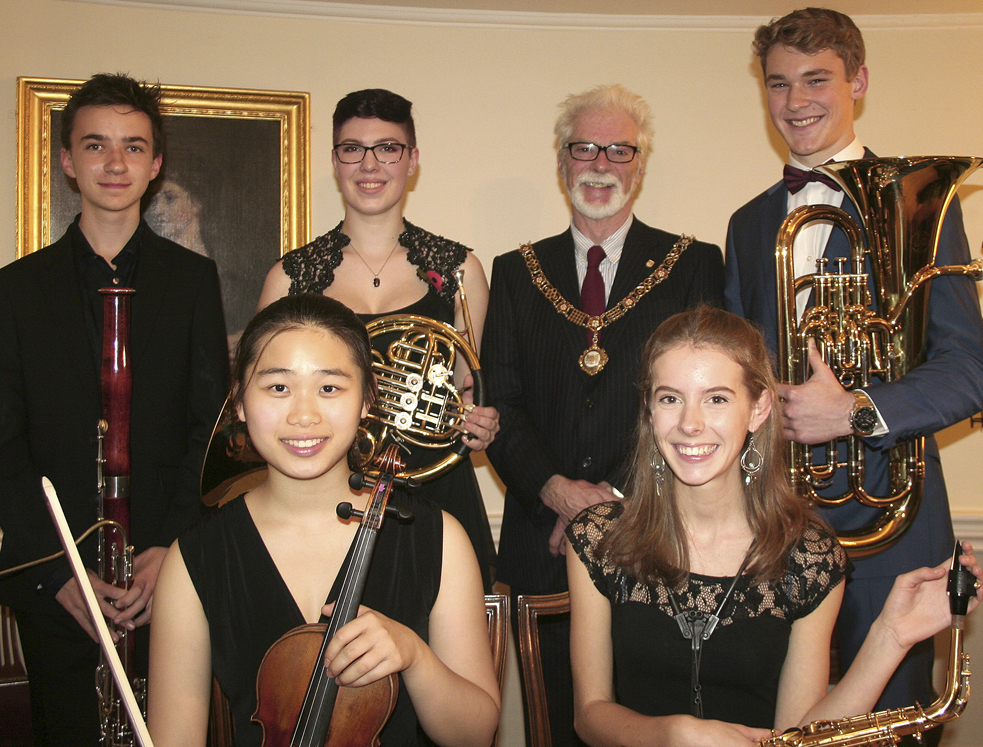 2018 Finalists with the Mayor of Bath Clir Patrick Anketell-Jones 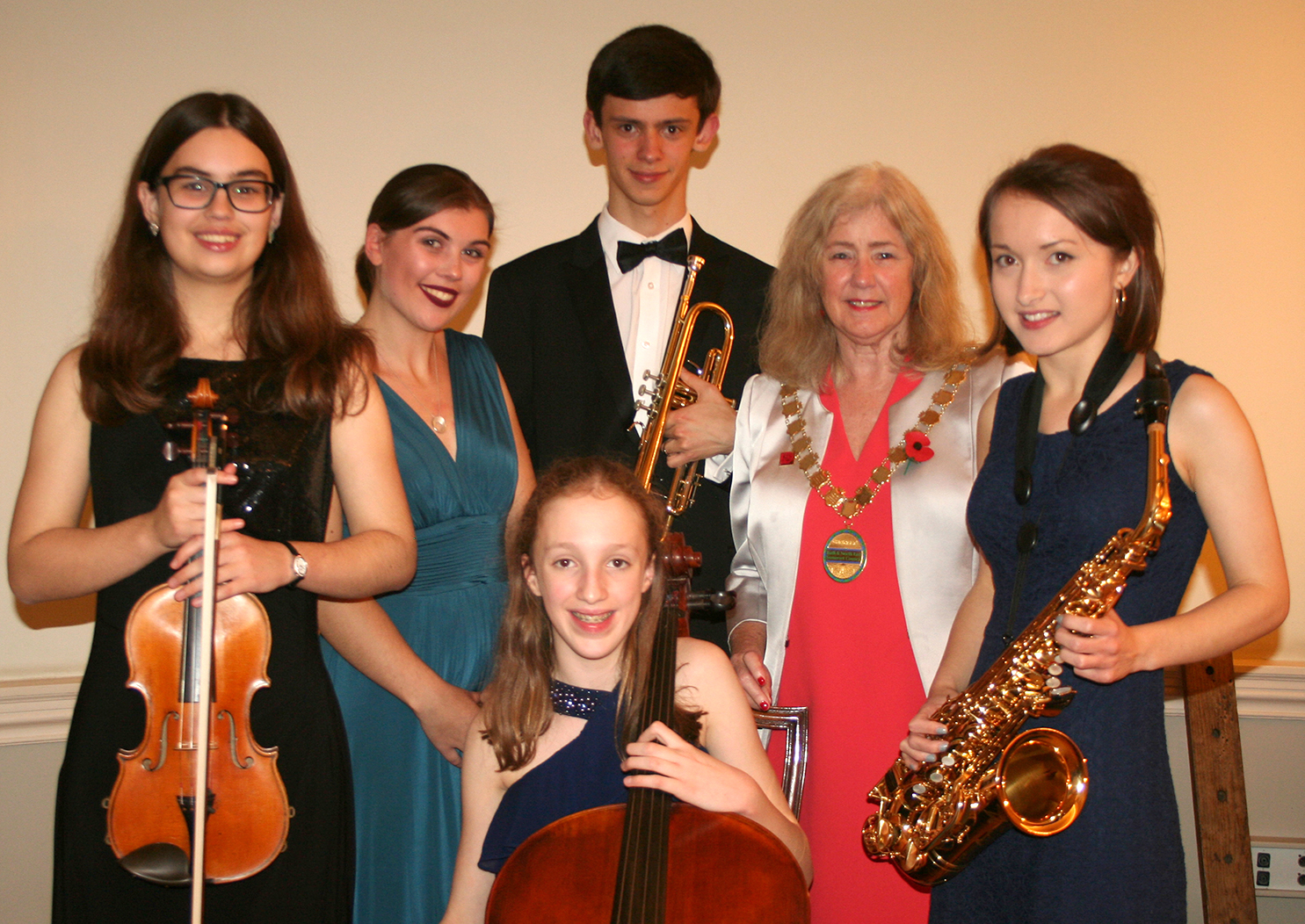 Bath Young Musician of the Year 2017

This was another marvellous concert at the Pump Room, emphasising how the high standard of musicianship is continuing to increase.  There were 5 different musicians – ‘cello, soprano, saxophone, trumpet and violin, and the adjudicator said how the audience had been almost transported around the world with the wide variety of music performed. The judges were looking for consummate musicianship, different ‘colours’ and nuances in the music, with confidence and good communication.

Nicole Micheli (saxophone) played Heiden: “Sonata” and Milhaud: “Scaramouche”. She is a member of the Wiltshire Youth Jazz Orchestra and also the National Youth Jazz Orchestra. Her variety or music was very well controlled, with lots of contrast of volume and ‘smoothness’ and staccato.

Martha Meager (soprano), sang “I could have danced all night”, “Pulled”, “With You” and “Some People”. Martha attended Bristol School of Performing Arts from 2010-2015. Her recent productions have included Les Miserables, Annie and Aladdin. She also sang a wide range of different songs and acted well to engage with the appreciative audience.

Wesley Downing (trumpet) also competed in this concert last year. This year he played Rimsky-Korsakov: “Flight of the Bumblebee”, JGB Neruda: “Trumpet Concerto” and Zequinha Abreu: “Tico Tico” The first and last were incredibly fast and exciting, and the concerto was thoughtful and lyrically played.

He has played in BANES’ ‘Brass Tacks’ for nine years, and, as a member of many groups, he has had the opportunity to perform in the Royal Albert Hall for the Schools Proms.

While the judges were discussing the winner, last year’s winner, Katherine Stonham (piano), returned and gave a thoughtful performance of a Sonata by Antonio Soler and ‘Pagodes’ by Claude Debussy.

Rachel enjoys solo and orchestral music, playing with National Youth Orchestra, local Youth Orchestras and Trowbridge Symphony Orchestra. Even while having to control the sensitive violin, with her double-stopped music from Paganini, and the rapport with her accompanist, her eyes were acting out the music and she communicated superbly with the audience.

It was a wonderful evening, and all music lovers are strongly recommended to come to the future Mid-Somerset Festival concerts.

History of the Bath Young Musician of the Year event

In November 2017 it will be thirty years since the first Bath Young Musician of the Year contest when Liam Gribbin (flute) won the event. Since then it has been held every year, except 1988.

Finalists for this event are selected from those who have done very well in their vocal or instrumental classes in the previous March Mid-Somerset Festival. Competitors must be under 21 and live or study in Bath or within a 15 mile radius of the city.

“Winning the Bath Young Musician in 1987 meant a great deal. It galvanized me, a somewhat haphazard 18 year old, as Mary King may recall, and left me with no doubts about following a musical path as a flautist for the foreseeable future. I was extremely lucky that, for its first year, the final was a grand concert in the Guildhall and the prize was a wonderful trip to Australia as part of the bicentenary celebrations with the Mayor of Bath. I performed a number of concerts in Sydney and explained to countless Australians the link between Sydney and Bath. I went on to Music College later that year in London and then remained in the classical profession for a number of years afterwards. While I have not pursued music as my long-term career, winning that prize was a springboard not only into more flute performance, but also into an adulthood filled with classical music.”

Past Winners of Bath Young Musician of the Year