Sadly due to the lack of live qualifying classes in March we are unable to run Bath Young Actor this year. We look forward to resuming this prestigious event in 2022 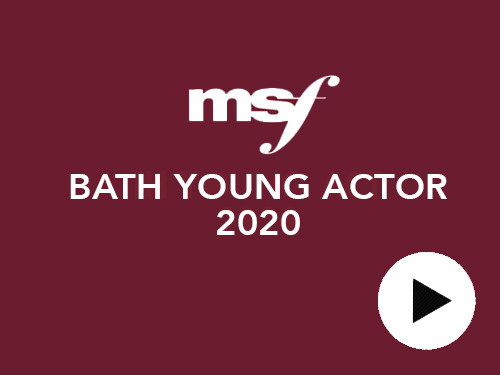 See the all the performances plus a message from the Mayor of Bath. 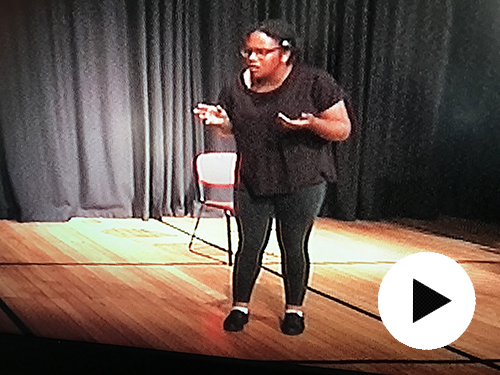 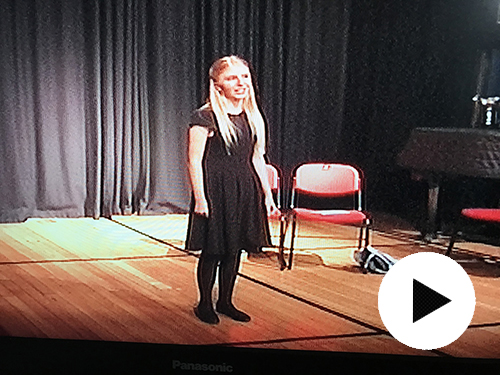 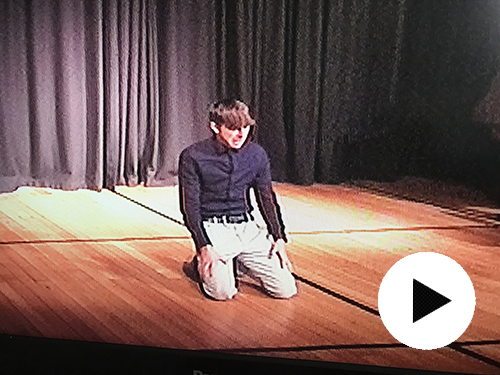 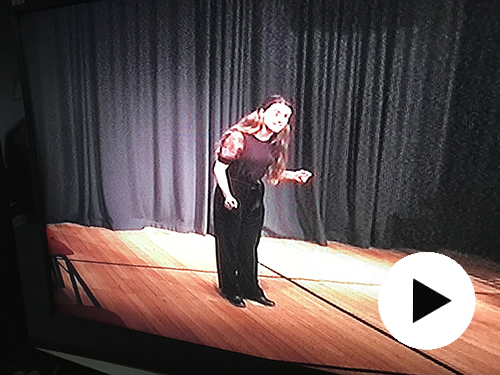 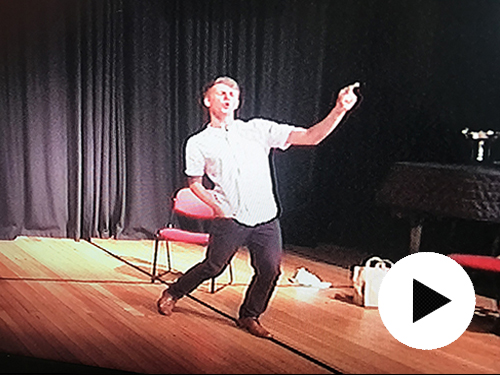 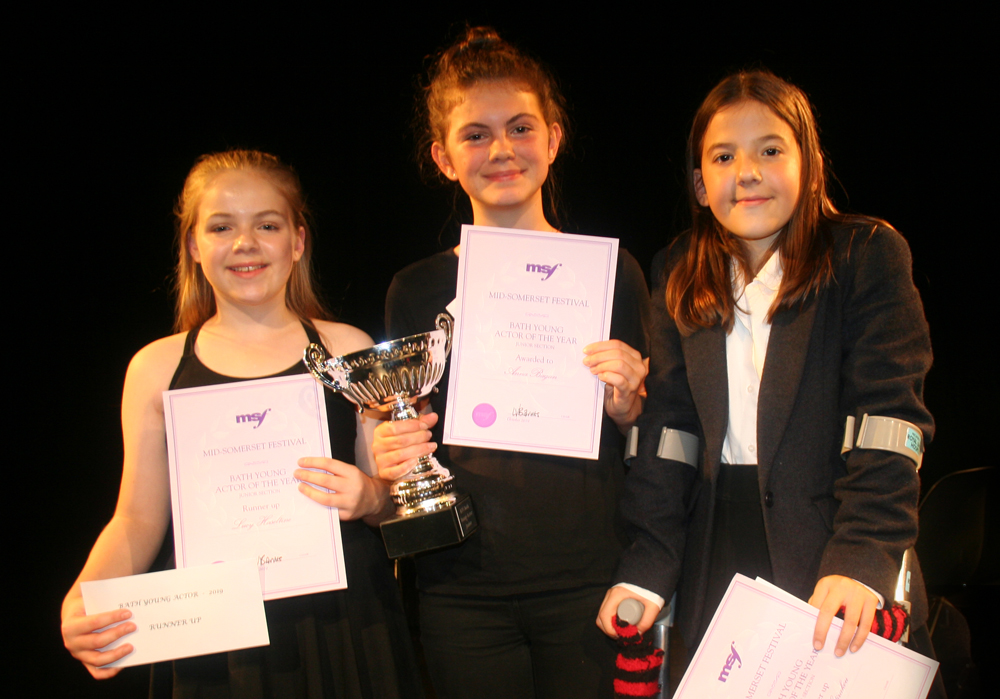 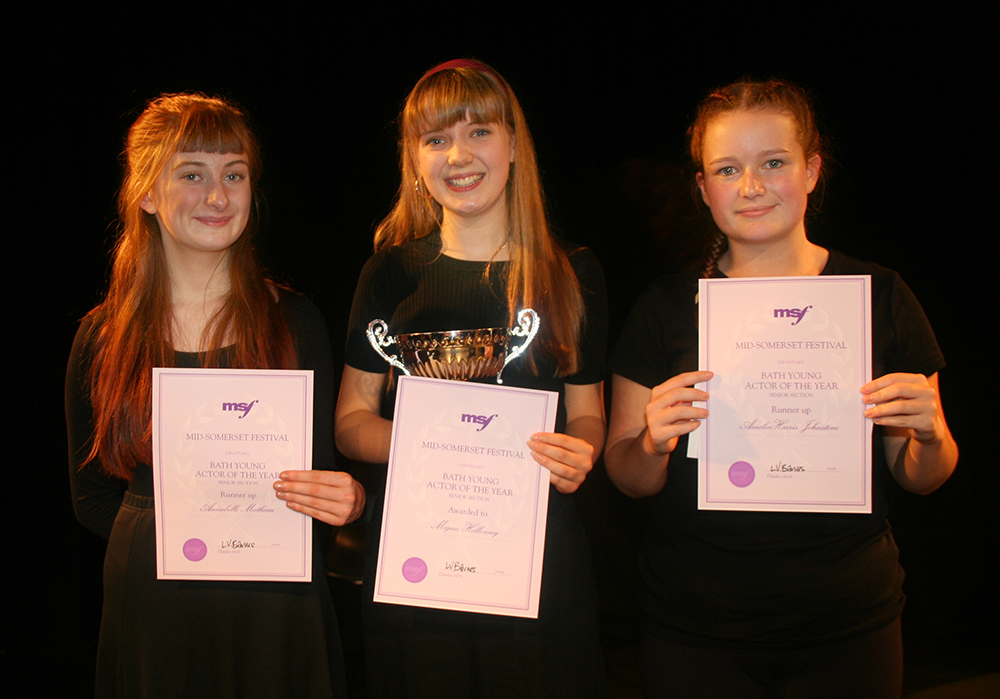 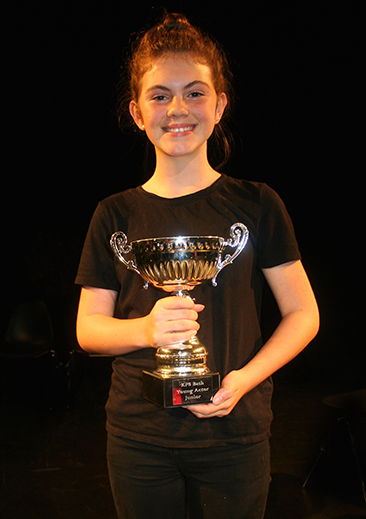 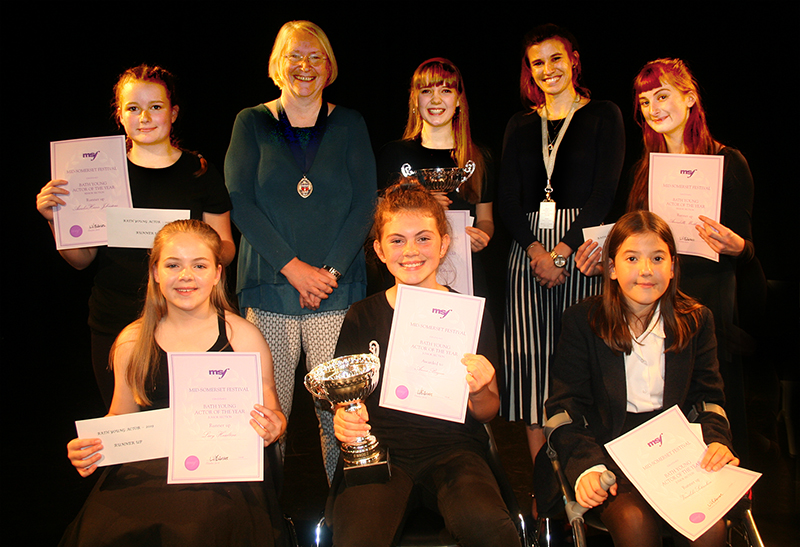 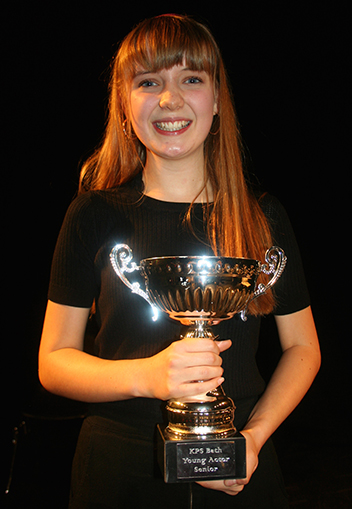 Review of Bath Young Actor of the Year 2019.

Bath Young Actor of the Year, now in its sixth year, is a highlight of the Mid-Somerset Festival calendar. On October 11th, six talented performers, chosen from the 2019 festival classes in March, competed for the junior and senior titles at The Edge, the University of Bath’s arts and creativity hub.

Each contestant had to provide a 10-minute repertoire on a theme of her own choice. Writhlington School student Anna Bagan’s exploration of the theme of ‘Parents’ won her the junior cup. The twelve-year old was praised by adjudicators Katrina Mulverhill and Rebecca Thompson for her compelling performance, convincing them she really believed in what she was doing. She began with Sammy’s Consent, playing Sammy eyeing up her new stepmother for the first time. ‘A very brave opening,‘ commented Katrina Mulverhill, on Anna’s decision to begin the scene in silence which she maintained for a few minutes, establishing her character’s antagonism through the way she slouched in her chair. Her narration of an extract from Matilda had a ‘lovely touch of physicality’, according to Rebecca Thompson.

The runners-up in this section were Lucy Haseltine and Vassiliki Sotirakou, who performed on crutches having fractured her ankle two days before. Ironically, Vassiliki’s theme was Overcoming Difficulty, which she certainly achieved. Although her movements were inevitably going to be limited because of her injury, she exuded a quiet strength in her pieces, through her compelling facial expressions and perfect timing. In Every Brilliant Thing she gave a mesmerising performance as a child confronting her mother recovering from a suicide attempt as, according to Rebecca Thompson, she ‘didn’t push the darkness and caught the black comedy.’

Movement was an integral part of Lucy Haseltine’s repertoire on ‘Shakespeare’s Legacy’ with pieces that were, according to the adjudicators, ‘well-crafted with plenty of shape and thought.’ Whether she was one of Macbeth’s witches or Peaseblossom in I, Peaseblossom she commanded the stage though her fluid movements and intense facial expressions.

The winner of the senior cup was Megan Holloway, a Year 13 student at St Augustine’s College. Her exploration of ‘Desire’ began with a scene from The Life and Loves of a She-Devil where she completely conveyed the mental unpredictability of Ruth’s character. In Wastwater she gave a chilling performance, described by Rebecca Thompson, as ‘sinister and brutal.’

Runner-ups Aurelia Harris Johnstone and Annabelle Matheou chose ‘Intimations of Mortality’ and ‘Lost Children’ as their themes. Aurelia showed a confident comic touch in a brief scene from Oliver Twist and, in a contrasting mood and role, her Lady Macbeth revealed, ‘a real sense of purpose. It was a magical moment,‘ Katrina Mulverhill said, ‘when you saw him, so did I.’

Annabelle’s repertoire was marked by a ‘mesmerising focus and was very well-shaped,‘ said Rebecca Thompson who also praised her performance as Constance in King John for her ‘stillness at the beginning, where she unpicks the depth of pain.’ 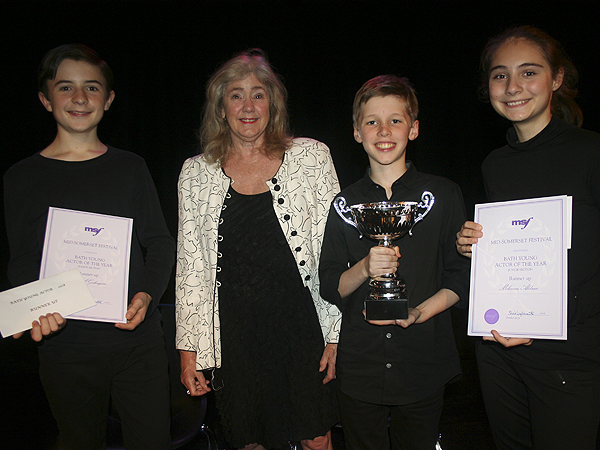 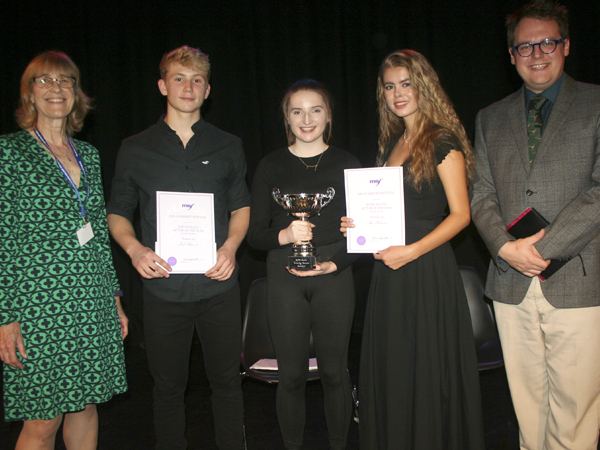 Bath Young Actor of the Year, a highlight of the Mid-Somerset Festival calendar, is now in its fifth year. On October 12th six talented performers, chosen from the 2018 festival classes in March, competed for the junior and senior titles at The Edge, the University of Bath’s exciting arts venue. This year’s adjudicators Ben Humphrey and Ann Bauer commented on how the evening was a fantastic celebration of all things theatrical.

Each contestant had to provide a 10-minute repertoire on a theme of his or her own choice. Joshua Glover, the youngest competitor, won the cup in the junior section for his exploration of ‘Life and Destiny’. Ben Humphrey commented on the brave choice Joshua made in starting with Shakespeare’s ‘Seven Ages of Man’ which everyone knows and he congratulated him on his ‘wonderful understanding of form and physicality.’

Joint runners-up in this section were Raphael Gahagan and Milenna Aldam.  Raphael was commended by Ben for the ‘genuine sense of care’ and his engagement with the audience during the pieces he chose for his theme ‘The Children’s War.’ Adjudicator Ann Bauer complimented Milenna on the sincerity she brought to her performances.

Anabella Fairgrieve’s ‘invisible’ acting and ‘less is more’ performance in ‘Finding Your Voice’ was judged a winner. From her powerfully moving portrayal of Rosie in Bovell’s ‘Things I Know to be True’ to her pitch-perfect accent and clever, comic timing in ‘The Help’, she drew us in ‘with a quiet power’, commented Ann Bauer, winning Anabella the senior Bath Actor of the Year cup.

Runner-up Jack Attwood and Alice Robinson explored ‘Ambition’ and ‘Who was Anne Boleyn?’ as their themes. Jack’s command of the stage and ability to play the audience was evident in all his pieces. Adjudicator Ben Humphrey admitted he envied the magnificent power in Jack’s strong, resonant voice – causing the audience to laugh. ‘Your eyes told us so much,’ said Anne Bauer to Alice who created a range of moods in her exploration of Henry V111’s second wife.

‘There’s fabulous talent here and wonderful diverse pieces,’ said former Mayor of Bath, Cllr Cherry Beath, as she presented cups, certificates and prize money, sponsored by Kingswood Preparatory School,  to the competitors. She added she was proud to be a patron of the Mid-Somerset Festival which is run entirely by volunteers and she encouraged others to become involved. 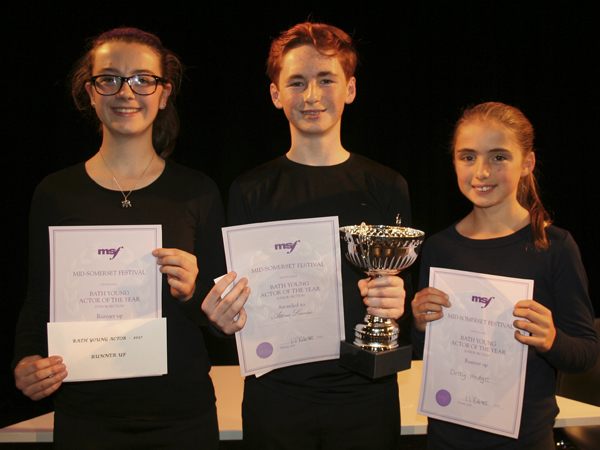 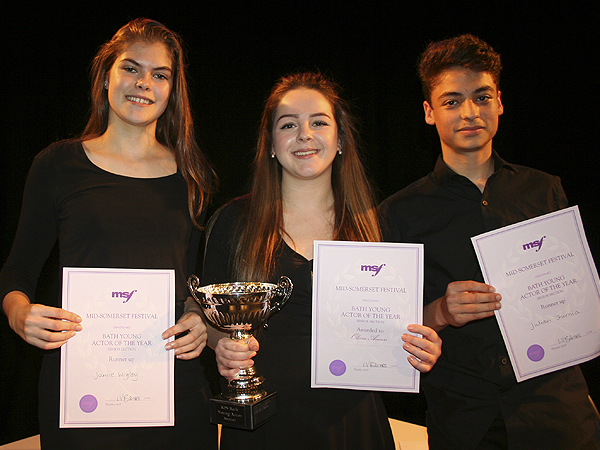 Dotty Hodge, Atticus Lorenzo and Izzy Lane in the Junior category and Jamie Wigley, Julian Shirnia and Olivia Annis in the Senior category were all more than worthy of the trophy. At the end of the evening the adjudicators, Jonathon Owen and Jenny Thornton, chose Atticus as Junior Bath Young Actor for his thoroughly entertaining exploration of the personification of animals in literature, and Olivia as Bath Young Actor for her exceptionally accomplished interpretations of Shakespeare, Dickens and contemporary drama.

Guests of honour at the event, sponsored by Kingswood Prep School, included Wera Hobhouse MP and Cherry Beath, Chair of the Council, who both presented the prizes to the winners. Mid Somerset Festival Chair, Lynne Barnes, thanked the families of the young people involved for their support and encouragement.